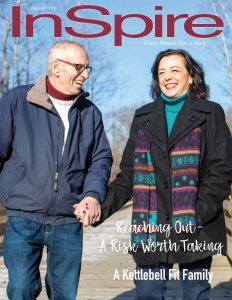 For 50 years, Mary Jane Millehan was led to believe the father who had raised her, John, was her biological father. Throughout those 50 years, her mother Carlotta, now deceased, had sealed up all the edges of the lie so the truth couldn’t get out. But she made a mistake. She told her closest girlfriends the truth and made them swear to secrecy.

It wasn’t until after the parents who raised her died – John in 1997 and Carlotta in 2014 – that Mary Jane learned the truth. Five years ago, during a dinner outing with her mother’s friends (an outing meant to help soften the blow of her mother’s death), she was shocked to learn that a man named Tom Peters was her real father – a man who had been married to her mother for three years when they were in their 20s. Like Mary Jane, Tom was led to believe for 50 years that John, a man who was having an affair with his wife Carlotta back then, was the father.

But, John and Carlotta both knew the truth.

So did her mother’s friends she was out to dinner with.

“I wanted to be part of my mother’s friends’ lives after Mom passed,” Mary Jane said. “We went to dinner and a movie – something they had always done together.” While out, Mary Jane expressed skepticism about John being her real father. He had treated her differently, and they didn’t have a close relationship. She had a gut feeling something was “off” because during the father-daughter dance at her wedding, John looked at her and said she shouldn’t have any doubts he was her father. “Why would you say something like that? It was the worst night of my life.”

“My mother’s friends blurted out: ‘You are NOT John’s daughter – you’re Tom Peter’s daughter!’ They proceeded to tell me everything I’ve always known in my heart and soul to be true and it blew me away. It was a secret they had kept for 50 years.”

“I was shocked. I could not believe (but did believe) this was true. I told them how I never felt I was his daughter and never wanted to be. I was relieved, happy, exonerated, teed off, violated, sad — every emotion you can imagine. My entire life had been a LIE!”

Mary Jane, who lives with her husband Ron in Roanoke, Virginia, finally met her real dad, Tom Peters of Brookfield, Wisconsin four years ago – several months after learning the truth. She hadn’t reached out to him yet due to hesitation she’d be rejected again.

“My husband Ron, who has been my rock, felt I had been through so much. He wondered if I could handle it if this turned out to be another rejection. He knew me so well. So, I chose not to look for my father at that time.”

Ironically, her real father found her. He had time on his hands to think about his life. His longtime wife Elaine had Alzheimer’s and was living in a care facility after he could no longer care for her at home. He was spending most of his daytime hours with her, and still goes there every day to feed and be with her.

She doesn’t know him and doesn’t speak or walk. Little by little, he began to put the pieces together that led to Mary Jane.

After being told by a friend that his ex-wife Carlotta had died in 2014, Tom looked up the obituary. “It said she lived in Roanoke and so did her daughter Mary Jane,” Tom recalls.

He became curious. “Call it my ‘women’s intuition,’” Tom said. He began to dig deeper, calling his ex-brother-in-law Bernie (Carlotta’s brother), who, according to the obituary, lived in Tennessee.
And the rest of the story is history. Bernie told him everything – that Mary Jane was his daughter. He’d suspected it all along, but didn’t know for sure until Mary Jane learned the truth.

That day back in 1963, when Tom’s wife left him for her boss John, is a horrible but vivid memory.

“We were both working for John at the time,” Tom explained. “He sent me to a job assignment that day. I soon learned the real purpose of it. It was to keep me from knowing he and my wife were planning to pack up her things and run away with my 10-day-old daughter. His employees were helping him. I was so shocked when I came home unexpectedly. I caught them in the middle of packing. Carlotta said she was leaving me. They went out the door right in front of me, taking my newborn baby girl with them,” Tom said, noting these days that would signal an Amber Alert. “I had no idea anything was going on between them. I was just 25. Never in my wildest dreams did I think my wife would leave me. All communication was cut off after that.”

Although Tom assumed he was Mary Jane’s father, a blood test that would prove it during divorce proceedings never took place. Carlotta led him to believe John was the real father.

Tom’s phone call in 2015 to talk to his daughter Mary Jane for the very first time came as a shock to her. “He called me on a Monday, but I didn’t call him back until Wednesday,” Mary Jane said. “I was scared, excited, and nervous. So much was going through my mind. When I called him back, he said ‘I didn’t think you were going to call.’”

The two talked nearly two hours, getting to know each other by phone. “I was compelled to call him the next day, and then it just became a daily thing,” Mary Jane said. “This man is wonderful, and I enjoy our daily conversations. We’ve traveled back and forth several times between our homes in Virginia and Wisconsin.”

Tears came easily as this father-daughter duo met for the first time at the Milwaukee airport. “I had no idea what her personality was like, but we hit it off right away,” Tom said. “Now, she calls me 4-5 times a day and texts me in between our personal visits.”

Not long after meeting, they decided to do DNA testing that would prove he was her father. The numbers didn’t lie. The test proved it. “We were both so happy,” Mary Jane said.

When Tom first went to visit Mary Jane in Virginia, she threw a “Meet My Dad” party for about 50 friends. On a visit to Brookfield in 2018, she threw him a gala 80th birthday party.

Mary Jane says she and her dad are alike in every way. “Both of us are short, athletic, love sports and enjoy doing something healthy every day – whether it’s yoga, walking or golfing,” Mary Jane said. “We both love Cheerios and bananas for breakfast.”

As for what she likes doing with her newly found father, Mary Jane says she loves to cook for him even though he eats like a bird. “He’s got some great jokes, stories, and we just enjoy being together. I never knew you could love a parent like this. It’s really an amazing connection.”

At 81, Tom’s first Christmas with his daughter last month was special. Mary Jane, who turned 56 on December 9, arrived to be with her dad for their annual father-daughter visit on her birthday. Two weeks later, she and Ron returned to her dad’s Brookfield home for their first Christmas together.

Tom, who’s thrilled to have his daughter in his life, ventured out to get a real tree. “I had it all set up and ready to decorate when Mary Jane and Ron arrived.”

“We had a wonderful time decorating the tree and making our own new traditions,” Mary Jane said. “And I made Dad a fabulous Christmas dinner.”

Although Tom had adopted his wife Elaine’s oldest daughter and they later adopted four more children, he never knew he was the father of a girl named Mary Jane who graduated from Beaver Dam High School and now lives in Virginia.

Having her in his life has come at a time when he’s losing his loving wife, Elaine. “Mary Jane’s taken my mind off feeling sorry for myself. She’s put new life into my life,” Tom said, adding that she’s so easy to talk to, fun to be around, and very hardworking. “She’s a real people person. She and her husband do so much together. I see a great marriage between Mary Jane and Ron like I had with Elaine.”

Ron is also grateful and very fond of his “new” father-in-law, Mary Jane said. “Ron said he can’t imagine life without him.”

“We are family,” Mary Jane adds. “We have each other. He will always be my father and I will always be his daughter. No one will ever take that away from us ever again.”

“What I love about Dad is his wit, his laugh, his handsome face, his walk, his love for his wife, his dog, and me. Also, his approval of my life, my husband, our friends and family. I’m thrilled with his automatic love and acceptance.”

“My life will never be the same,” Mary Jane concludes. “My life is now complete.”

NOTE: Tom Peter’s wife Elaine, who suffered with Alzheimer’s, passed away shortly after this story was submitted for publication.

Breast Cancer Survivor Passionate About Helping Others Fight Through It

Six years ago, when Karen Jo Dobyns noticed a phone call coming in from her doctor, she hurried out of the restaurant she had just entered to answer it. She […]

Arletta Allen is an amazing example of resiliency and determination in spite of the odds stacked against her. Now 38 and the mother of five sons, she survived physical and […]

From Idea to Reality